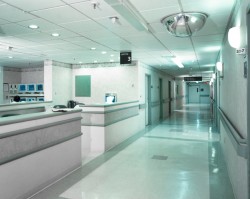 The role of the modern hospital has changed considerably over the last 20 years, as more and more facilities have had to struggle to keep their doors open.  According to the latest data published by CMS, in 1990 there were an estimated 6,552 hospitals (including short stay, critical access, and non-short stay facilities); by 2010 that number had dropped to 6,169, a nearly six percent decrease in comparison to the 16 percent increase in Medicare enrollees during that same twenty year time period.  The combined increase in utilization and decrease in number of hospitals is especially significant in California, where health care spending has grown exponentially over time.

Even against such odds, hospitals have remained a major point of access to American health care, in large part because of the availability of their emergency departments.  The 1986 Emergency Medical Treatment and Active Labor Act (EMTALA) requires hospitals to provide a specified level of care to anyone presenting for emergency medical treatment regardless of citizenship, legal status, or ability to pay, or risk the imposition of hefty fines or even loss of participation in federal healthcare programs. As a result, the great bulk of responsibility for America’s uninsured has fallen to the nation’s hospitals, who must now shoulder approximately 60 percent of uncompensated medical care.

Such a mandate to provide treatment to the uninsured weighs heavily on facilities striving to stay afloat amid an ocean of often-conflicting regulations.  In 2008 alone, uncompensated medical care in the United States approached an estimated $57 billion, of which nearly $43 billion was paid by federal, state, and local governments from funds earmarked for this very purpose through Medicare.  This included disproportionate share hospital (“DSH”) payments, indirect medical education (“IME”) payments, and Medicaid (including DSH payments and supplemental provider payments, for example). Although the Federal Government typically foots close to half of this annual bill, its contribution equals only 2 percent of federal healthcare spending yearly.

In addition to EMTALA’s influences, the Affordable Care Act (ACA) contains certain mechanisms for CMS to evaluate both patient satisfaction and hospital quality measures.  As a result, within the next few years hospitals may face a one percent reduction overall on Medicare payments under the Inpatient Prospective Payment System (“IPPS”), as these funds are now earmarked to cover performance bonuses. By 2015, hospitals that continue to show poor performance ratings will not only be excluded from this bonus pool, they will also face additional cuts in reimbursement.

Today’s health care structure favors a new dynamic, as ACA emphasizes performance as a means to save money and increase efficiency, rather than the cost-based initiatives that had traditionally been the hallmark of American health care. As such, it marks a dramatic shift in government policy as it relates to both regulation and funding. While performance measures in health care have historically focused on individual clinicians rather than systems, ACA legislation now encourages the formation of accountable care organizations (ACOs), a concept designed to overhaul the nation’s health care system by implementing structures that monitor the quality and efficiency of entire groups  of  medical practitioners in an effort to assess performance and create standards for compensation. The Hospital Value-Based Purchasing Program is another step toward shifting the reimbursement infrastructure from the cost of services to improvements in patient health and performance.

To successfully adapt to the resultant fluctuations, hospitals and health systems must first understand the ways in which the delivery of contemporary American health care is changing. We provide information and education on the processes and procedures at the heart of health care today, including: